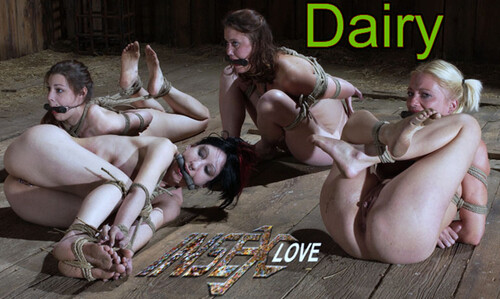 The farmer leads in the last of his stock and checks his herd for the night. All four are locked into metal containment. Crickets chirp. Girls moan. Oh the country life. By morning, a fog has settled. Muffled cries can be heard. Then a strange sight emerges. A wooden cross is the central element. A four-by-four juts out from the leg of the cross. The edge of the four-by-four is turned upward and Angelica sits on it, her legs spread so that it cuts into her crotch. She is locked into metal stocks. Her ankles are shackled and chained upward to either end of the stocks. From there, on both sides, the chain is fed upward through pulleys then downward, attaching to the breast bondage of two girls, 411 and Piglet. Their arms are bound behind their backs. They have wooden bits bound into their mouths. Both of them are standing on tiptoes, the three girls counterbalancing one another. Now the farmer leads his cows up to pasture. They follow in a line, chained neck to neck. A wooden beam is tied to Angelica so that it swings back and forth between her legs, rubbing her pussy. Moonshine and 411 both have four-by-fours bound to their arms, holding them straight outward. Piglet’s arms are bound behind her back.

Piglet hangs in a very small cage, folded up tightly on her knees. She is led to the milking station and chained in place. The milking tubes suck onto her nipples. The pump, whoosh, pump, whoosh of the milker beats time as her nipples are milked. Mr. Pogo fucks her mouth. Then Pogo plunges into her cunt amid her cries, a mixture of pleasure and distress. A milky froth collects around the opening to her vagina. The vibrator is used on her. A tube is removed from her tit and sucked onto her clit. The inner sleeve opens and closes over her distended pussy. The marks from the rim of the tube form a superior ring above her nipple. She no longer has tits. Piglet has teats. When she comes, she squeals.

Piglet is bent over the platform, her torso chained to the apparatus. A bar is lowered over the small of her back and locked down. Her neck is chained down and her arms bound behind her back. Her feet are spread and shackled to either side. A spider gag goes in her mouth. He brings in the milker, a stainless steel canister with a pump and tubes that attach to teats, in this case, tits. Piglet’s breasts droop downward, He wets the areolas and lifts the tubes into place. They suck on. Her nipples are drawn down into the tubes. The milker sets up a rhythm, pump, whoosh, pump, whoosh. The inner sleeves of the tubes collapse and re-inflate as she is milked. A hook penetrates her asshole. She is vibrated to orgasm. Afterward, a milking tube is taken from a tit and suctioned onto her pussy. Her clit is pulled into the mouth of the tube. Piglet crawls back to the barnyard. Angelica’s head is all that we see of her, locked into place at ground level. Piglet is ordered to piss on Angelica’s head. 411 is milked next. The tubes suck onto tit after tit. When the tube is applied to pussy, the suction slurps at it, sucking the clit deep into the throat of the tube. Moonshine pees during her milking, her teats plumped out by the milker. Asen Angelica is milked, 411 is brought in, her arms bound back in a leather sleeve. She wears a black hood and a shiny black ribbed dildo. Angelica is fucked in time with the rhythm of the milker. Fuck, suck, fuck, suck. Outside, the dairy farmer takes a break, pissing into a funnel. It drains onto Moonshine, locked into her metal box. Angelica is brought to the funnel and told to piss also. Urine drips onto Moonshine, running down the rocks of the wall. All four girls are bound tightly in different positions on the floor of the barn. Wooden bits have been tied into every mouth. Angelica, bound tightly into a ball, cries from the pain of the bondage. Piglet rests on her bulbous breasts, flattening them. The girls moan and sigh and writhe, their cries echoing through the barn. Strings of drool drip. Moonshine’s labial jewelry gleams between the backs of her thighs. Urine erupts, running down her leg. They try to help one another get out, but it only appears to cause more suffering. The last shot is of three girls that have been squished into one metal box, a squirming mass of girl meat. The doors are closed and locked. They’re bedded down for the night. 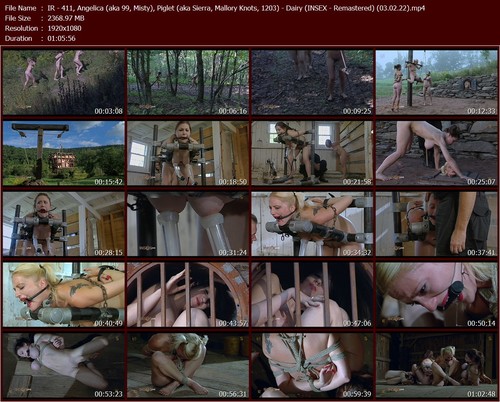