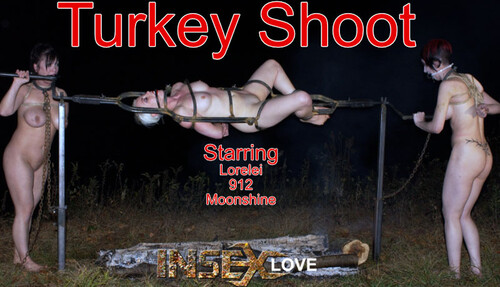 He thinks of them as turkeys.To him these girls are nothing more than meat. He sees himself as a hunter, a man who loves fresh meat. And so it begins. They are naked, his girls. There are three of them. He has them in his hunting cabin. Their arms are bound behind their backs, their hands taped. They are gagged with tubing held in place with cable ties. A few feet of chain run from neck to neck, so that they are tethered to one another.

He sits. He tells them about a turkey shoot. As he talks, he assembles his gun. Their little cries and whimpers escalate. Who could have known? One minute you are just walking your dog or sipping coffee in your home. And the next thing you know, you are naked. And he has a gun. And there is really nothing else to do, is there?

When he tells you to run. You run like hell.

He drags them outside and unchains them and starts spewing out pellets, scaring them up good. After all, he wants to be challenged. He’s looking for sport, just a little fun. They run through the woods all in a flurry, screaming, squawking. Open season on girl.

The blond is the first to drop. He takes the others down too, the brunette and the black-haired girl. The marks of paintball drip down their soft skin in red trails. It is quiet in the woods. Their bodies lie still, white, silent.

They are side by side in the back of his truck, all on their stomachs, all in hogties, all gagged. They rock back and forth on bound breasts, bouncing with the bounce of the truck. They make a flurry of terrified chirps. He stops the truck and opens the back gate. To each pair of ankles, he attaches a rope. Then he moves the truck forward so that they are dragged out of the back by the ankles. He hoists each of them up, their bodies hanging upside down in the middle of the woods. He smacks asses. He plays with their breasts and nipples, taut from the cold. His rough fingers twist and knead, doing with them whatever he wants.

Evening comes. A fire burns beside a pond. All three girls are standing, bound tightly together at the neck, hobbled this way, moaning, whimpering in the cold. They shuffle close to the fire. But soon it is too hot. They jostle back and forth, breast to breast, their skin luminous in the dark.

He arrives with a metal grill that he sets on two posts. It is in the shape of a body. He tells them they have to decide who is going to be cooked tonight. It is for them to decide. They moan. They cry, moving backward, clustered together, the human cook basket waiting.

The blond is chosen. She is locked into the rungs of the frame, her legs spread, arms locked behind her back, and a metal bar thrust into her cunt. It keeps her very still, so that the fire can do its work. She breathes hard as the heat grows, baking, her chest heaving. The other two girls are given the task of making sure she’s roasted nice and even. Her skin goes red. Please hurry, she says, please, please hurry. And so they turn her so she can cook the other side and beg to be turned again. An apple is shoved into the blond’s mouth. She is quieter now. As though she is giving up, letting go. As though she can forget her body. She is basted and barbecued, her round breasts smeared with sauce, dripping down into the fire. Fluid drips from her knees.

The flush of her body may remind him of the pink inner shine of pussy. When the lips are spread and wet, just before the plunge, and now the scent can sometimes be smoky.