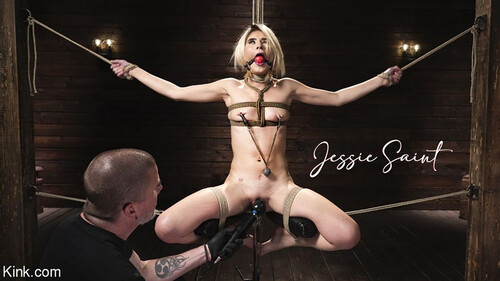 Jessie is very excited about her encounter with The Pope and can’t wait to see what he has in store for her. She’s dreamt of the day that she can finally be dominated in bondage properly.
Her day begins sitting on a V shaped stool with legs tied tight and spread wide. Jessie’s arms are pulled out to the sides and a rope around her tiny neck is pulled up for breath control. The first move is to tenderize her flesh with his crop to get her warmed up for what is about to happen. His second move is adding weighted clamps to her pussy and then her petite nipples to intensify suffering before making her cum against her will.
The next scene is all about Jessie’s suffering in rope bondage. The Pope puts her upside down in a brutal single point hip suspension with one foot tied to her opposite thigh. Jessie endures the grueling position as he rips multiple orgasms form her pussy.
Finally Jessie is on top of a table with her wrists and ankles tied to keep her in place as The Pope torments her with his sadistic tools. The heavy leather flogger thunders as it hits her body over and over again. Her screams fill the dungeon beckoning The Pope to double the pain and pleasure Jessie craves. He adds a crop around her neck to control her breathing as he destroys her pussy with non stop orgasms. Now that she is sensitive from cumming so much The Pope adds one final touch. He adds a crotch rope and then hoists her into the air leaving Jessie hanging by her cunt to ponder the decisions that got her in this delicious predicament. 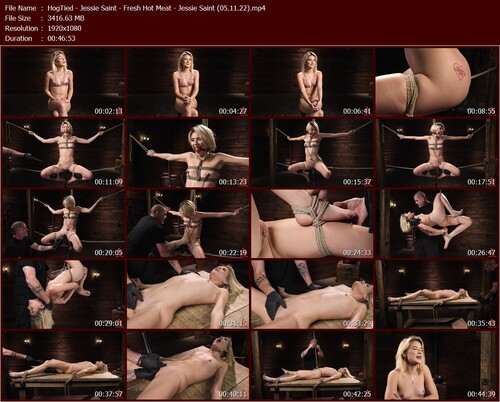