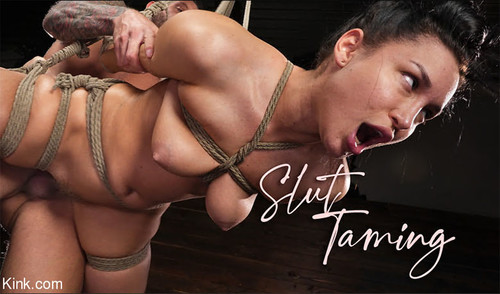 Gabriella Paltrova, AKA Gabby, took a little time off, but she’s back and hotter then ever. Gabby’s in desperate need of some full domination, as her brat is starting to show! We get her into the dungeon, and in no time she is being a bossy little slut to Quinton James. Quinton is a man who is used to being underestimated, so he lets her do her thing. Gabby has no idea what he’s capable of, but she is about to find out…the hard way.

We begin with Gabby on her back with her ankles pulled up, her arms pulled down beside her, and her thighs spread nice and wide. Quinton doesn’t ease into this at all, because now it’s time for him to show her what he’s made of. Breath control sets the pace for what he has in store for her before he fucks her mouth and pussy. Gabby now sees the error in her ways, but Quinton has only just begun.

Next, Gabby is pulled into a hogtie suspension where Quinton has the ability to use her holes as he sees fit. Orgasms pour out of Gabby uncontrollably as he continues to fuck and vibe her pussy until she can no longer take it. In the final scene, Gabby is on top of a fuck box with her legs tied to her arms so that Quinton can have his way with her one more time. He checks in to see where her brattiness is, and surprisingly it’s subsided since he started the day. He fucks her face for a bit before going back to using her pussy, and ripping nonstop orgasms out of her. She begs for him to stop, but he is going to prove to he that you can’t judge a book by it’s cover. 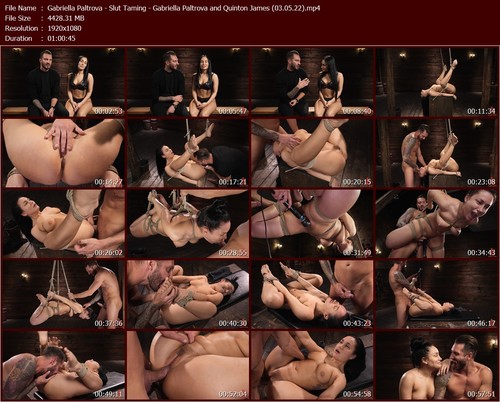