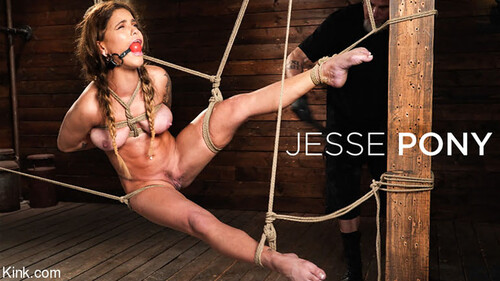 Jesse Pony is a dirty little slut who wants to suffer at the hands of The Pope. She wants to know what it’s like to lose all control, and have an evil sadist have his way with her. Lucky for her, he was in the mood to break-in a new slut, and she was going to suffer, his way. Jesse relinquishes all control, being more than willing to suffer in pleasure and pain. Her day begins standing in the middle of the dungeon with her her arms box-tied, and an up-line tied off holding her in place. He inspects her body momentarily, and then gets to work on adding more rope to this progressive tie. First he takes a leg and pulls it up and away. Her other leg is secured to the opposite column to keep her legs spread. Throughout the progression, he takes moments to seduce her with his sadistic ways. He takes her other leg into the air, and turns this into a full-suspension. Every piece of rope increases the severity of the tie, and makes Jesse’s pussy even wetter. Next, Jesse is in an inverted-hogtie suspension and completely helpless. The Pope goes to work on making this slut suffer with his flogger and then uses the zapper to fill the room with her screams. It’s too soon to break her, so he begins to fuck her pussy with a large dildo and Jesse hangs there and has mind blowing orgasms until he has finished with her. The next scene opens with Jesse on the floor in a spread eagle position, but modified in a way to simulate the method of quartering. Every limb connects to a point above her that controls the tension on all of the ropes. As the scene goes on, The Pope increases the tension of the ropes to increase her suffering. Every time Jesse tries to find any comfort, the ropes tightens and she loses that battle. The Pope steps on her pussy with his big boot, and Jesse finds comfort in grinding her slutty pussy in the soles of his boot until she orgasms uncontrollably. The Pope then makes her clean the soles of his boots with her tongue. The day is finished with Jesse mounted on a Sybian and made to cum uncontrollably. 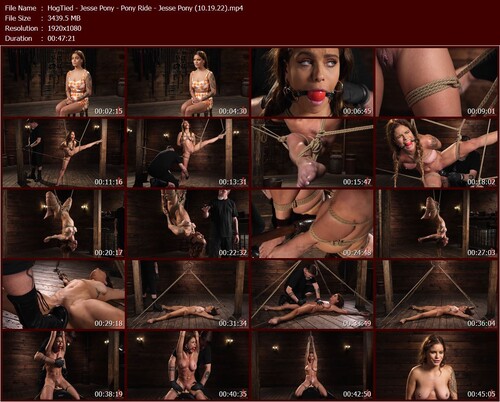